Whistleblowerlaws.com is ‘The Source’ for whistleblower information, news and opinion. Over the past five years alone, our attorneys have worked with whistleblowers in cases resulting in the return of more than $5 billion to federal and state governments. They have worked with their whistleblower clients to secure recoveries against the largest pharmaceutical companies, major energy companies, health care providers, and defense contractors. Firm counsel have litigated under Federal and State False Claims Acts and have brought cases under the Securities and Exchange Commission (SEC) and Internal Revenue Service (IRS) whistleblower programs.

HAVE YOU'VE BEEN THE VICTIM OF RETALIATION? 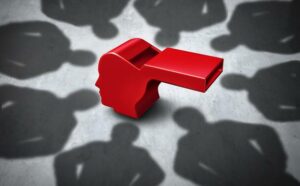 In the United States, and now in other countries including China, there are laws protecting the rights of individuals to blow the whistle on wrongful conduct. Today, government regulatory bodies, including the United States Securities and Exchange Commission and the Internal Revenue Service, actually rely on information from whistleblowers to enforce compliance with laws and regulations.

There is no ‘one source’ for Whistleblower protections, rather they are provided by several laws at the federal  and state levels, as part of laws concerning false claims, discrimination laws, environmental laws, antitrust laws, civil rights laws and more. It is important to remember that the statute of limitations or the time to raise whistleblower retaliation is often very short, so don’t hesitate to contact counsel to protect your rights.

Where the wrongdoing involves conduct that cheats the U.S. Government or causes the wrongful expenditure of U.S Government funds, a whistleblower may be entitled to bring suit under the Federal False Claims Act. Where the conduct cheats state or city governments out of money or deprives them of the products and services that they contracted to buy, the whistleblower may have a right of action under state or municipal false claims acts. There are twenty-nine states that have enacted false claims acts and at least two municipalities, New York and Chicago, have false claims laws.

DO I HAVE A FALSE CLAIMS CASE

HOW DO I START MY CASE?

People who think they’re witnessing corporate fraud undoubtedly have many questions and concerns. This site will help answer some of those initial questions, and you can easily and confidentially contact us if you believe you’ve witnessed fraud.

We’ll provide you with insight into what it means to be a whistleblower. In the Getting Started section, we provide information on what the experience is like, what to do if you think you’ve witnessed corporate misconduct, how to select a whistleblower law firm, and what the process is like as you work with your whistleblower attorneys.

Over the past five years alone, the attorneys at GBB have worked with whistleblowers in cases resulting in the return of  nearly $6 billion to federal and state governments. GBB attorneys have worked with their whistleblower clients to secure recoveries against the largest pharmaceutical companies, major energy companies, health care providers, and defense contractors. Learn More!

Program Summary Civil litigation is no more than a process to resolve disputes. Most cases never go to trial because the process is designed to provide parties with sufficient information abou...
No Comments

By Reuben Guttman and Liza Vertinsky, July 25, 2022 In the 1990s, state Attorneys General learned how to leverage their resources when they retained private counsel to sue the...
No Comments

Workplace whistleblowers and a fear of losing federal funds are expected to play vital roles in ensuring compliance with COVID-19 vaccine mandates ordered by President Joe Biden’s administration...
No Comments

Most often involves improperly or over-billing Medicare/Medicaid for services in violation of claim requirements.

False statements made in order to secure federal grants or funding.

Government contractors deliver goods of inferior quality or in violation of inspection/testing requirements.

What is a whistleblower?

A whistleblower is someone who reports to an employer, a regulatory body, or an oversight or review authority, the violation of a regulation, standard, or ethical obligation.

Are there laws that protect whistleblowers who are retaliated against?

What is a kickback?

HAVE YOU WITNESSED FRAUD BUT DON'T KNOW WHERE TO TURN?